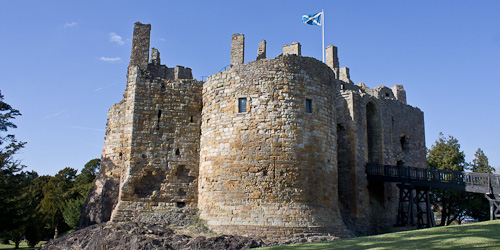 Dirleton Castle and Gardens are situated in the heart of Dirleton, separated from the Village Green by an impressive wall which encloses the castle, beautiful walled gardens and a bowling green.

The castle was built in the 13th Century and for the first 400 years of its life served as the residence of three noble families, the de Vauxes, Haliburtons and Ruthvens. The subsequent downfall of the Ruthvens saw the castle abandoned and the siege by Oliver Cromwell’s soldiers in 1650 rendered the castle almost derelict. When the Nisbets purchased the castle in the 1660s and built the Archerfield Mansion House nearby, the graceful ruins became a major feature of their estate. The family finally handed the castle into state care in 1923 and the ruins and gardens are now maintained by Historic Scotland.

Today, the castle is a delightful place to visit by adults and children alike, who can enjoy scrambling up and down the de Vaux towers, peering into the grim prison pit and cavernous storage vaults and hiding inside the Ruthven dovecot, one of the best preserved pigeon houses in Scotland, housing over 1000 nesting boxes. 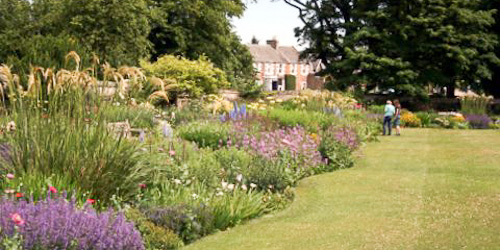 The gardens of today date from the late 19th and early 20th Centuries. The formal Victorian West Garden was faithfully reconstructed in 1993 and the beautiful North Garden, the first herbaceous border the visitor sees on entering the Castle grounds, dates from the Arts and Crafts movement of the 1920s. At 705 feet long (215 metres) it is the world’s longest herbaceous border.

Main menuPlease Choose from below
Scroll to top

You can find out more about which cookies we are using in settings.

This website uses cookies so that we can provide you with the best user experience possible. Cookie information is stored in your browser and performs functions such as recognising you when you return to our website and helping our team to understand which sections of the website you find most interesting and useful.

Strictly Necessary Cookie should be enabled at all times so that we can save your preferences for cookie settings.

If you disable this cookie, we will not be able to save your preferences. This means that every time you visit this website you will need to enable or disable cookies again.