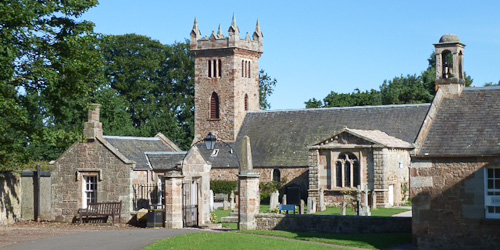 Dirleton Kirk is a very pretty sandstone church built in 1612 to replace the 12th Century Kirk in Gullane. It is situated in the heart of the village on Manse Road, just off the Village Green. Around the Kirk is an attractive churchyard with beautifully sculpted yew trees and several benches to allow contemplation in this delightful and peaceful setting.

Inside the Kirk, which is open daily to visitors, there is a wealth of information about the historic nature of the building and surrounding area. The church had the first example of neoclassical design in Scotland when the Archerfield Aisle was added in 1664. The church also has a tower crowned with Gothic pinnacles, which were added in 1836, and interesting examples of stained glass, including St Francis and the Animals by the artist Margaret Chilton (1936).

Dirleton Kirk is a Church of Scotland denomination and is linked with Abbey Church in North Berwick, where there are occasional Sunday evening services at 6pm. The Guild meets fortnightly on Tuesdays at 2pm or 7.30pm from September to March.

Details of special Kirk services and events such as concerts in the annual Lammermuir Festival and Opera East Lothian performances held within the Kirk can be found in the Events Diary.

The small church at Dirleton contains stained glass windows which are entirely Scottish and, in a nutshell, trace the development of Stained Glass in Scotland from towards the end of the 19th century up until the early 1960’s. These windows can be viewed on an unusually intimate level due to scale, proportion and location of their surroundings. They do not have to contend with a grander more remote architecture, but can be discovered and inspected privately at leisure.

When you visit the Kirk, you will find some printed sheets with historical information inside.  If you would like further information, the publications listed below are excellent sources.  You should be able to purchase them from The Coastal Communities Museum in North Berwick.

The Dirleton Kirk Sunday School meets every Sunday during school term.
The children come to the Sunday service at 9.30am and stay for the first part of the service. They then go to the Kirk Hall with two or more teachers who are parents or members of the congregation, where there are games, crafts, Bible stories and other activities. At Christmas, there is a Nativity Play written for (and increasingly by) the children involved, and performed in the Church on the last Sunday before Christmas.

Dirleton Kirk’s well-equipped hall and kitchen are available for community use and are suitable for classes, birthday parties, functions and charity events.

The Hall is currently used for meetings, Yoga Classes, Callanetics Classes and a village playgroup.

It is a popular venue for Adult and Children’s Parties, Christening Parties, Dinner Parties and Business Presentations. 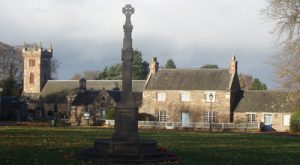 Dirleton’s War Memorial is situated on the triangular green in front of church. It was designed by the prestigious architect Sir Robert Lorimer and is built from Northumbrian stone.

It is inscribed with the names of the dead and the following inscription:

Like so many war memorials, it was commissioned in response to the many parish deaths in the First World War and it was formally unveiled by the local Member of Parliament, Patrick Ford, on Sunday 10th October 1920. Prior to this ceremony, an afternoon service and sermon was held in the Kirk to the largest congregation that anyone there remembered, followed by a large assembly around the monument attended by a formal group of ex-servicemen. The names of the 31 local men who had died in the war were read out, the memorial was dedicated and wreaths were laid around its base.

Five of those 31 dead had worked together at Castlemains farm, three of them brothers. Another of the dead was David Watt who lived in Rosemary Cottage and was a golf professional. He had won the Scottish Open Championship just weeks before the outbreak of war.

A further four names of Dirleton fallen were inscribed on the memorial after the Second World War.

This tradition of a church service followed by a gathering outside around the memorial with the reading of the names of the dead and the laying of wreaths has continued to this day.

Sir Robert Lorimer was known before the First World War as an architect of grand houses and he was involved in the restoration of Lennoxlove House, Haddington in 1912. After the War, the age of the great houses was over but his reputation meant that he was awarded the commission to design the Scottish National War Memorial at Edinburgh Castle in 1919. 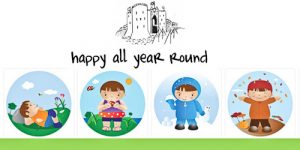 Dirleton Playgroup is held in the Kirk Hall and is open during school term times on Monday (all day), Tuesday, Thursday and Friday mornings. Morning sessions run from 9.15am to 12.15pm and currently cost £11
Children can attend from age 2 to 5 years and their names can be added to the waiting list from 18 months.
There is flexibility about how many sessions a child attends each week, and you can either pop into a session to see the playgroup in action and pick up an application form or use the contact details below.

You can find out more about which cookies we are using in settings.

Strictly Necessary Cookie should be enabled at all times.

There is no personal data held and most expire at the end of the session.

If you disable this cookie, we will not be able to save your preferences. This means that every time you visit this website you will need to enable or disable cookies again.